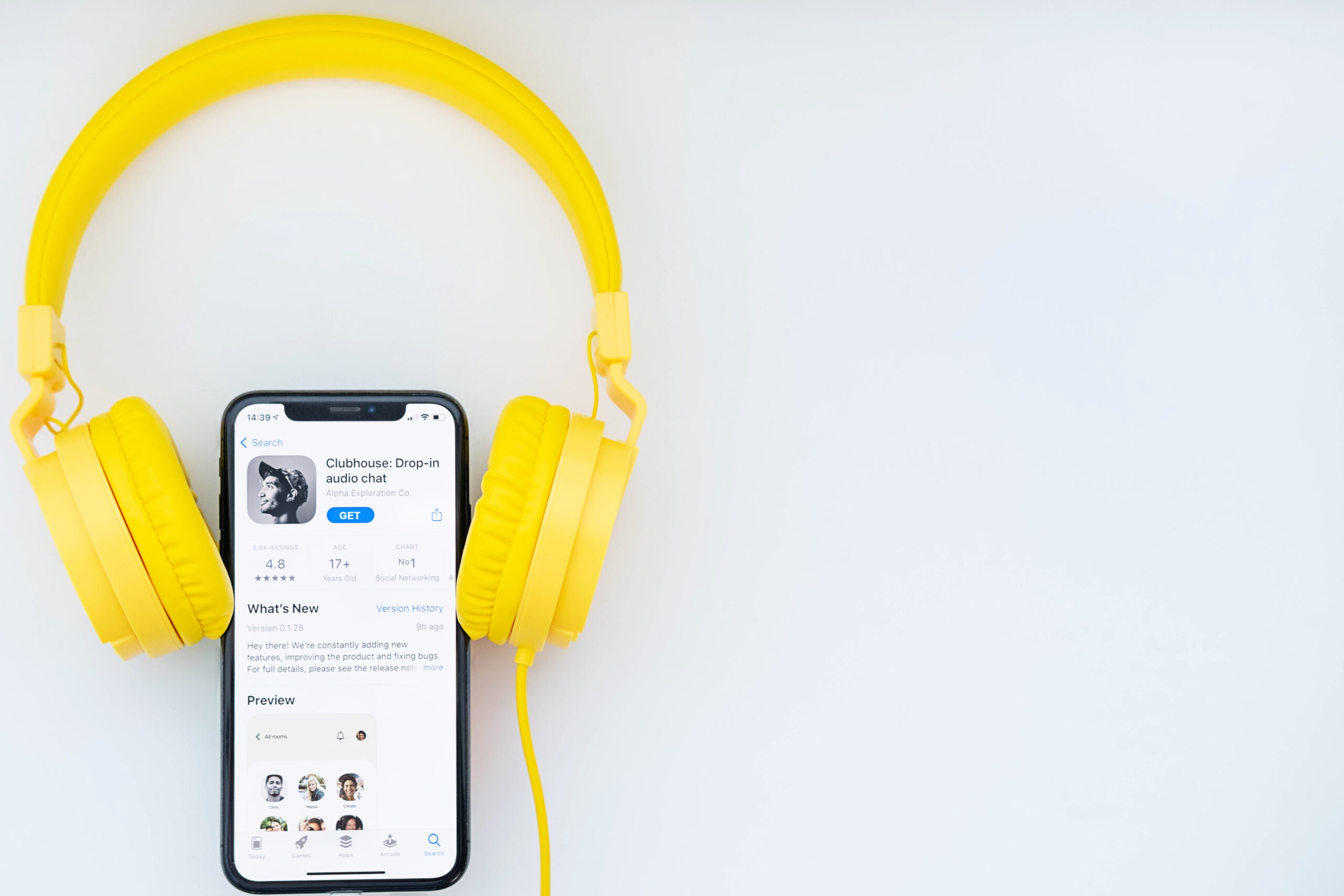 All you need to Know about Clubhouse app. A definitive guide.

This new audio-based app has recently gotten a lot of attention. What distinguishes it from the rest? What impact does it have on social media? And what are the issues that have arisen as a result of it? What All you need to know about Clubhouse?

Paul Davison and Rohan Seth created Clubhouse, which was originally released in early 2020. Despite having only 1500 users at the time, it was valued at over $100 million by May. The app now has 10 million users and is valued at $1 billion.

What exactly is Clubhouse?

The clubhouse is an audio chat room that anyone can join at any time. The company describes itself as a new form of a voice-based social platform that lets individuals all around the world communicate, share experiences, develop ideas, build friendships, and meet interesting new people.

How does it Works ?

What is the mechanism behind it?

Clubhouse is an invite-only community, which means that in order to join, existing Clubhouse member must send you an invite using their app, granting you access to create an account. Currently, the app is only accessible for iOS and Android.

Any user on the site can create a “room” that other users can join. Speakers, listeners, and moderators control who gets to talk in each room. At Clubhouse, talks are conducted similarly to conferences: the mediator is in charge, and people are only allowed to talk when they are given permission. Listeners are muted by default and can request to talk by raising their virtual hand. This provides for a more orderly approach to taking part in the same conversation.

Moderators play a crucial role since they not only help set the tone of the discourse but also have a significant impact on the discourse and energy in the room. The moderators must ensure that the debate in the room is respectful and calm because the app currently lacks a function for reporting abuse or hate speech, and the chats are not recorded or saved. Moderators can switch on/off audience members’ capacity to raise their hands, elevate other speakers to moderators, mute speakers, and even return them to the crowd.

When you join Clubhouse, you’ll be walking down a corridor with closed doors, where you may take a brief look at each room’s name, some of the people who are now in the room, and the number of people and speakers in the room. The rooms you see are open to the public, and anybody can enter them at any moment. You can, however, create a private room with one or more of your connections and have a private conversation there.

What distinguishes it from other social networking applications?

Clubhouse concentrates completely on the audio experience, rather than text and photos, as every other major social media website does. For the first time, a social networking app’s content is not based on aesthetics or appearance; there are no faces, images, videos, private chat, or written remarks. The programme relies on the only remaining option: voice.

Another intriguing feature of the software is its user interface, which is quite straightforward, if not primitive. This could be due to a lack of initial funding to develop the software. However, when the app’s user base grows, things may change, and the developers may introduce a more branded user interface. The app also lacks a consistent icon, which is altered with each major app update and includes photographs of Clubhouse users.

Clubhouse, in an era where social media has become the “fast food” of online entertainment, takes an entirely different approach; whereas videos on Tiktok or Instagram last only a few seconds, Clubhouse talks endure for hours in the rooms. Clubhouse isn’t the only audio-focused website that has grown in popularity; Twitch, for example, has already increased its monthly streaming to 1,6 billion in April 2020. Twitch’s “Just Chatting” function has helped bring people closer together, and several notable figures, including Alexandria Ocasio-Cortez, have live-chatted on the website.

The popularity of these “slow” networks, where users spend a lot of time — on Twitch, the average time spent per user is 95 minutes — contrasts with the common notion that GenZ has a short attention span. The emergence of videotelephony software like Zoom, which expanded by 396 percent in 2020, reflected the demand for a more intimate and as-close-to-reality manner to communicate during the pandemic.

Big Internet corporations are already chasing these new trends; it appears that Facebook and Twitter are investing in the development of Clubhouse-like products. Messenger has increased the size of its Rooms to 50 people, Whatsapp has lifted the 4-person videocall limit, and Instagram has made Lives viewable on the desktop and is working on a co-watching feature that will allow users to share videos from other users during Lives [source Willmedia].

Is it secure? What’s the big deal about Clubhouse?

There is presently no content management policy in place, as well as no safety measures such as the ability to block users or report harassment. Some users have expressed their dissatisfaction with the platform’s lack of moderation and abuse issues, claiming that it has become a haven for misogyny and bigotry.

Furthermore, Clubhouse’s terms of service and privacy policy are only published in English, and the company’s data protection is primarily dependent on the CCPA, not the GDPR. This isn’t to say that the app isn’t available in Europe. Clubhouse has received a formal warning from the German Consumer Federation as a result of these issues.

The Stanford Internet Observatory (SIO) has validated that Agora, a Shanghai-based provider of real-time interaction software, provides back-end infrastructure to the Clubhouse app in terms of privacy and data protection. A user’s unique Clubhouse ID number and chatroom ID are communicated in plaintext, according to the researchers.

Agora would presumably have access to users’ raw audio, potentially giving the Chinese government access. In a tweet, the SIO also stated that this is concerning for mainland Chinese customers. Clubhouse just said publicly that they have found a few areas where they can better their data protection with the help of the SIO.

“We’re pushing out updates to add further encryption and barriers to prevent Clubhouse clients from broadcasting pings to Chinese servers,” the business stated in a statement. We also want to enlist the help of an outside data security organisation to review and verify these changes.”

Why has it become so popular?

Initially, the app was largely regarded as a hangout for IT industry insiders. Clubhouse invitations have skyrocketed since Elon Musk sponsored an audio discussion with Robinhood CEO Vlad Tenev. Elon Musk isn’t the only celebrity to use the app; Oprah Winfrey, Kevin Hart, Drake, Chris Rock, Ashton Kutcher, and others have all used it. This is, in some ways, part of Clubhouse’s appeal; you get the chance to listen to, and possibly even engage in, talks with celebrities.

However, the fact that celebrities and businesspeople are flocking to the app isn’t the main reason for its success. During the pandemic, Clubhouse has become one of the few places to meet and interact with new individuals. People are more interested in and value community than ever before, and having the opportunity to hear and be heard by like-minded people can help people connect, relate to one another, and take care of their mental health.

Furthermore, on Clubhouse, your voice is your only means of providing value, which is a first in the world of social media. This means that you can participate in the conversation regardless of your appearance. Plus, similar to a podcast, you may listen to the spoken information while multitasking. Have you just gotten out of bed? Do you want to go for a walk or run some errands? It’s no problem.

Is Clubhouse going to be around for a while?

Will Clubhouse be able to withstand the test of time? Is it going to influence how we use social media? Will the app’s networking capabilities dwindle as more people download it? Will the app’s popularity dwindle if it loses its exclusivity? Only time will tell, and some anticipate that the app may eventually switch to a paid membership model. But for the time being, we can only say that Clubhouse has succeeded in bridging the gap between the two.

Finally, when it comes to social media marketing, Clubhouse reflects a shifting audience demand: people want greater value and transparency, but they also don’t want the sense of fabrication and never-ending stream of content that comes with following a company on social media. Will companies and marketers begin to saturate the app in the future? All we can do now is wait and see!

Previous
How can creators earn money with the Clubhouse app?

Next
There will be an end to unlimited Google Photos storage from June – What can you do?